In freezing cold winter, many places, like office, supermarket, shopping mall and home, are equipped with heating system. Generally speaking, most of people are short of exercise in winter. Truly, compared with chill outside, people prefer to stay at warm space, but it isn't good for health at all. What is worse, people's cold-resistance ability will decline gradually. Meanwhile, too much chill striking physical body will lower down immunity and resistance to illness. Fosjoas K1 electric skateboard will attract people out of warm house and make them fall in love with exercise as well as the cold winter.

Fosjoas K1 motorized skateboard is a skateboard, but is totally different from traditional ones. It is powered by lithium-ion battery and is based on aerospace attitude control theory, fuzzy software algorithm and gyroscope system to keep itself balance. Then, riding becomes very relaxing. When riders stand on the board and slightly lean forward, Fosjoas K1 electric skateboard will advance automatically. However, it doesn't mean that skateboarding is completely effortless. It just doesn't need too much physical strength, but a skillful force from join strength of four limbs, backbone and whole muscles. It won't make skateboarders exhausted even if continuously riding for one hour. On the contrary, the body will be fully exercised. Consequently, the blood circulation and metabolism will be much more favorable. 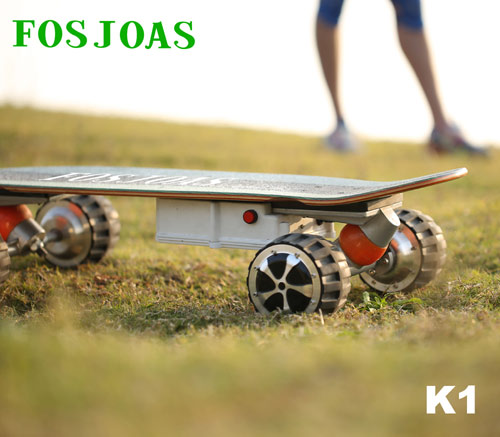 What can Fosjoas K1 electric skateboard do in cold winter? It can do a lot. Besides the equipment for exercise and a plaything for entertainment, it also can be transport for daily travel, which is a brand-new application when compared with traditional ones. Fosjoas K1 electric self-balancing skateboard is powered by SONY lithium-ion battery with 81.4Wh and 163Wh capacities. The maximum range it can reach is 20km, which can cover lots of travel needs in daily life. Some people even use it as a commuting transport to gain more sleeping time in freezing winter morning.