The city in which Mr Rosh lives is home to global-level exhibitions, which normally attracts millions visitor to this city. Around the exhibition venue, a lot of businesses have sprung up. Mr Rosh is a shrewd businessman who hates to see the opportunity to escape from him. These years, electric self-balancing unicycle are very hot in the market.

In his neighbourhood, it is easy to see some children riding electric scooters and scooting about in the square. At first, he did not take these gadgets to heart until he associated it with the exhibitions. He entered the exhibition venues several times. The venues are so large and spacious that it takes almost one day to make a complete tour at event. One-day tour surely makes the visitor exhausted. The enthusiasm must be put a dent in. Mr Rosh hit on an idea that establish a business to rent FOSJOAS two-wheeled scooters. 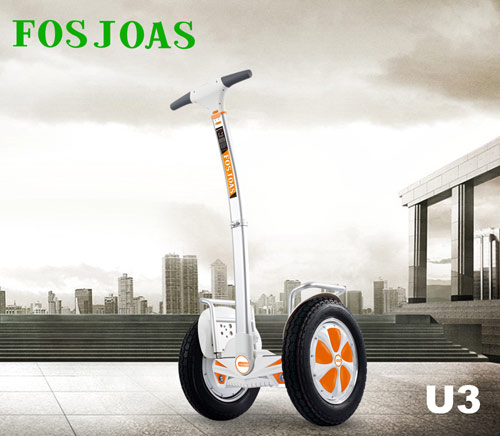 Firstly, he finds that FOSJOAS two-wheeled intelligent scooters are easy to steer, unlike other models like the single-wheeled scooter. The electric unicycle such as V6 invariably costs a beginner a whole day to learn it. This kind of electric scooter obviously is improper for rent. One the contrary, as long as he stands onto the FOSJOAS two-wheeled intelligent scooter, one can steer it and whizz about soon. Equipped with the smart chip built in the bodywork, FOSJOAS two-wheeled intelligent scooter runs by the bodily movement. This is a selling point. At the same time, it is an effortless ride. It can bring the rider to about 40 km/h on a full charge. Therefore, even if the rider makes a complete tour around the exhibition site, he will not be tired at all. The next day, he still can keep the high enthusiasm and energy for further visit.