Of late, Nelson has stroke his friends and colleagues around him as dashing and trendy. Last month, Nelson got an amazing birthday gift from his father. His father bought a skateboard for him. This skateboard is not the same as we played with in our childhood. This is a sort of electric skateboard, made by Moben Global Inc. The electric skateboard called FOSJOAS K1 rises to prominence soon all over the world. The biggest difference between the two sorts of skateboards lies in their energy. The FOSJOAS K1 is powered by electricity, offering an effort ride. However, it adopts the same exterior as the traditional skateboard. This is far from making Nelson more fashionable and dashing. What make Nelson trendy are the stylish changeable stickers onto the board of FOSJOAS K1.

To think about which group of customer go for the intelligent self-balancing scooter FOSJOAS K1. The young men predominate amongst the group of customers. The majority of them go after the fashion and vogue. They are into something novel and interesting and detest the featureless and boring. Nelson is no exception. Moben Global Inc. realises this important point, providing those K1 riders with various stickers. As a result, those riders like Nelson have many stylish and trendy stickers available for change at will. If one set of K1 has merely one single sticker, it looks dreary. Perhaps, many young men will not choose it because of its boredom. Nelson warms to it on the account of changeable stickers. Almost every week, Nelson changes the stickers, striking others as stylish and trendy. 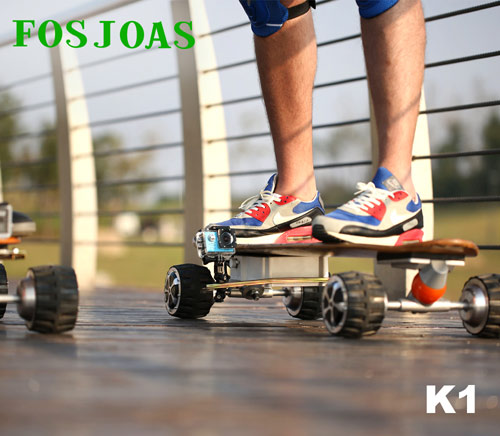 FOSJOAS K1 creates a varied life for Nelson. With FOSJOAS K1 balancing electric unicycle, Nelson feels the change in the way of life. Every morning, he shows his energy and spirit. At the same time, his youth also gives an uplift to others. The whole office becomes more energetic. It can be said that FOSJOAS electric scooter K1 gives a new spirit to the riders.