Nowadays, most of middle-aged people always complain that they are too busy to accompany their gerontic parents. At the same time, they also don't allow their parents to have a long-distance travel or to go other far places, because they worry about the safety of parents. In the daily life, they are even unwilling to let parents ride bicycle or drive car. Gradually, the twilight years of the elderly are quite tedious. That is not fair. Fosjoas V9 two wheel electric scooter unicycle will make the life of the elderly full of passion and the following will explain why.

Safe and comfortable riding makes a lot of elder people fall in love with Fosjoas V9 electric scooter. In the meantime, the children of the elderly don't worry about their safety anymore. The adopted intelligent chip, aerospace attitude control theory, fuzzy software algorithm and gyroscope system makes riding safe and comfortable. The elder riders can realize all controls, like speeding up, slowing down, changing direction and braking, via adjusting body gravity. Meanwhile, it is powered by lithium-ion battery, which liberates physical strength of the elderly and thus offers relaxing riding. Fosjoas V9 electric scooter owns very good flexibility. The elder riders can move or stop anywhere and anytime, which avoids some crashes to the hilt. 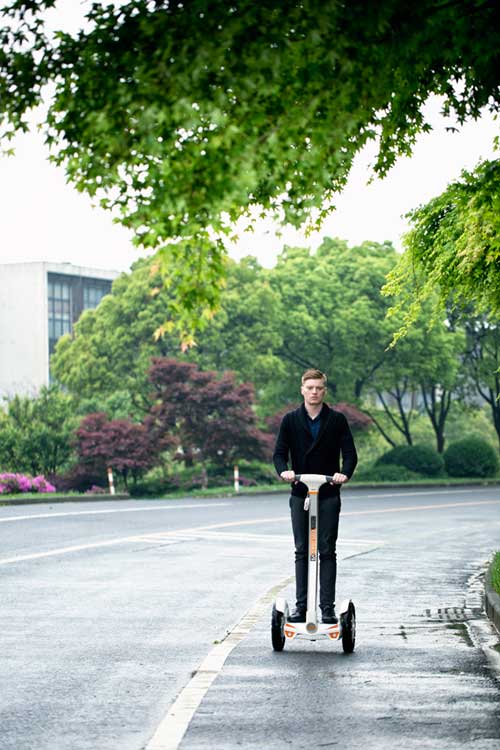 Now that Fosjoas V9 two wheel electric scooter enjoys so many advantages, what can it do for the elderly? It can be a plaything of the elderly. They can call for friends and ride Fosjoas V9 electric self-balancing scooter in an open place, such as a park, square or countryside. It can be an exercise equipment of the elderly. Whether in the morning or after supper, the elderly can ride Fosjoas V9 in the backyard or on street. Gradually, their four limbs will be much more flexible and muscles will e stronger. Good mood and health body are important parts of the twilight years of the elderly.