Why Is Fosjoas K1 Motorized Skateboard So Popular Among All People?

The figure of Fosjoas K1 self-balancing electric scooter can be frequently seen here and there. It seems as if all people whatever age group, gender and career love to ride Fosjoas K1 motorized skateboard. Some young boys and girls are riding it and weaving on streets. Some retired people ride it to exercise their body. Some people even ride it to go to school or company. Why is Fosjoas K1 motorized skateboard so popular? The following will unveil the true reasons. 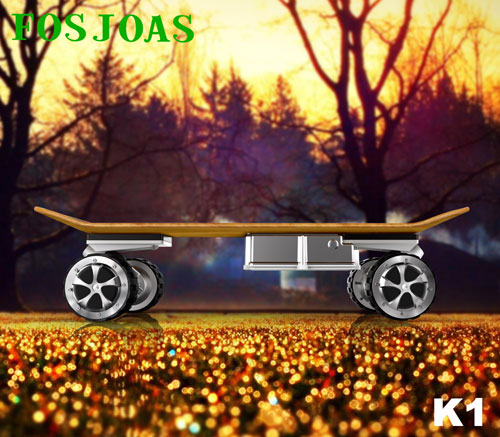 Excellent land surfing experience is the core. It is well-known that traditional skateboards rely on physical strength to realize different controls. However, Fosjoas K1 skateboard is totally different. On the one hand, it is powered by lithium-ion battery and thus physical strength can be fully liberated. On the other hand, it keeps itself balanced by adopted aerospace attitude control theory, fuzzy software algorithm and gyroscope system. Then, riders can finish all controls via body inclination. For example, slightly leaning forward will speed Fosjoas K1 skateboard up. That is to say, riders can enjoy land surfing at will. Besides, the wireless variable speed remote control has condensed wisdom with small figure and it also lets riders make life active.

When it comes to applications of Fosjoas Maple cheap electric skateboard, it can be concluded into two aspects. For one thing, it is a land surfing tool that gives people wonderful enjoyment. For another thing, it is an important transport in daily life. Now that it is powered by lithium-ion battery, it means it has range. Generally speaking, the maximum range is about 20km, which is why it becomes the commuting transport of many people.