Since the first sight, Alice cannot resist to think of Fosjoas V2 electric self-balancing unicycle, as she was appealed by the sleek and faddish design. A few days later, she brought it to her workplace and it really helps her out from endless walking. Now, she has higher work efficiency and also feels better about her job. Alice’s company, a big state-owned research institute occupies about thousands of kilometer land.

Her work, a purchaser requires her to commute among kinds of departments and she often goes to the factories. It seems as she is always busy in walking. When the ordered cargos arrive, she has to walk about fifteen minutes to the site and directs unloading. After that, the tested and qualified goods should be laid up in storehouse. She needs to negotiate with the supplier or manufacturer. Walking among different departments really makes her crazy. Such situation has been totally turned around, with the emergence of Fosjoas V2 self-balancing electric scooter. 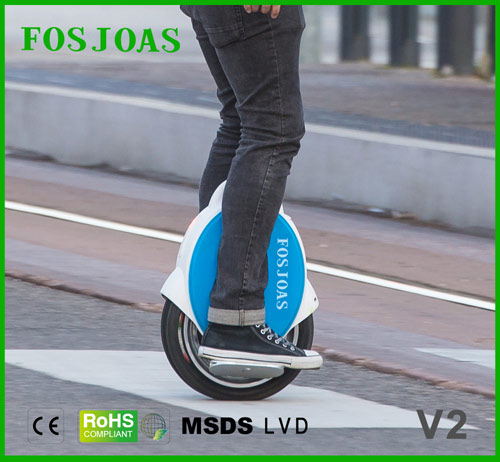 The first problem of such novel vehicle is how to ride it. It is super easy. Alice can realize all controls, like speeding up, slowing down and changing direction by adjusting her body slightly. For example, if she wants to move forward, she will lean body forward a little bit. It is because Fosjoas V2 intelligent electric scooter relies on aerospace attitude control theory, fuzzy software algorithm and gyroscope system to keep itself balanced.

Thanks to Fosjoas V2 twin wheel electric scooters, the fifteen minutes’ walk has been downsized into less than five minutes. More importantly, the laborious feeling has gone. For Alice, Fosjoas V2 is not only a good helper of her work, but also her life. According to her experience, riding it every day is even good for health. During the riding process, her whole body has been exercised.