What Roles Fosjoas K5 2-Wheeled Electric Scooter Can Play in the Daily Life?

Twenty years ago, the main daily transport was bicycle. Ten years ago, the main transport was public bus. Now, the main transport is private car. However, widely applying gasoline-powered private cars results in environmental pollution and traffic jam, which aggravates life pressure indirectly. Finally, intelligent self-balancing electric scooter market is booming, which is helpful to remit traffic pressure and protect the living environment. A type of magical electric scooter that will be introduced in the following is Fosjoas K5 two wheeled electric scooter. It is almost able to cover all of travel demands in daily life. However, it is more than a transport.

Fosjoas K5 two-wheeled electric scooter has very simple body design. Based on naked eyes, it is made up of two 8-inch types, two soft pedals, an operating arm with battery unit and handlebars. The small figure paves the way for weaving through crowds smoothly and thus it is able to avoid traffic jam. The equipped lithium-ion battery is replaceable, which ensures unrestricted range. Normally, many people who used to drive car to go to work start to love riding Fosjoas K5 electric scooter now, because it buys them much more sleeping time in the morning and more family time after work. It is also widely chosen as a travel transport for a day or two journey. In addition, there are many travel demands in daily life and Fosjoas K5 two-wheeled electric scooter can cover them all. 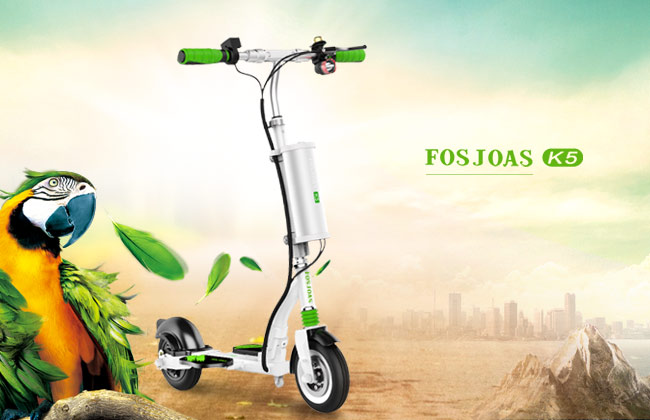