Luxury car always symbolizes high social status and thus it is often chosen by successful people as daily transport. No matter how luxury car is, it still will be stuck on the halfway by serious traffic jam, especially in rush hours. Its exhausts still harm the living environment. What if there is an alternative transport that can maintain their high social position and protect the living environment? Actually, such an alternative transport does exist and its name is Fosjoas V9 self-balancing two wheel electric scooter.

In the very first place, Fosjoas V9 two-wheeled self-balancing scooter owns very high-end appearance. It is equipped with two 14-inch tyres that are decorated by orange and white magnesium alloy. From the front side, Fosjoas V9 scooter owns noble Lamborghini face. Besides, it also owns an operating arm and handlebars that are made from aluminum alloy, which are lighter and tougher and have good shock absorption ability. As a whole, Fosjoas V9 two-wheeled self-balancing scooter gives out a strong sense of high quality and nobleness. 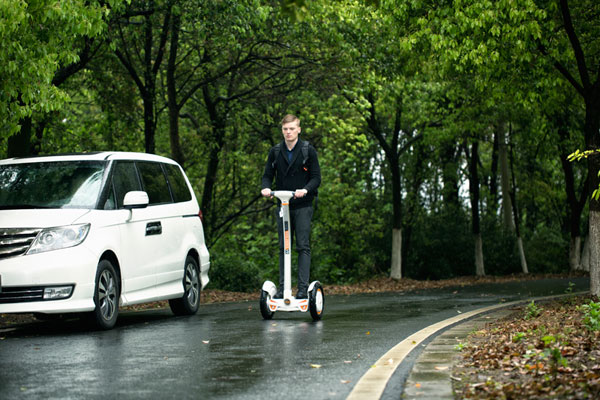 Fosjoas V9 electric scooter also owns powerful internal performance. Easy riding benefits from self-balancing property. Slightly leaning forward, backward, left and right is able to realize speeding up, slowing down, turning left and turning right respectively. The built-in closed stereo offers high-quality music experience. Such a closed stereo can be connected with cell phone via Bluetooth and plays melodious songs in it, which will amuse and relax the journey.