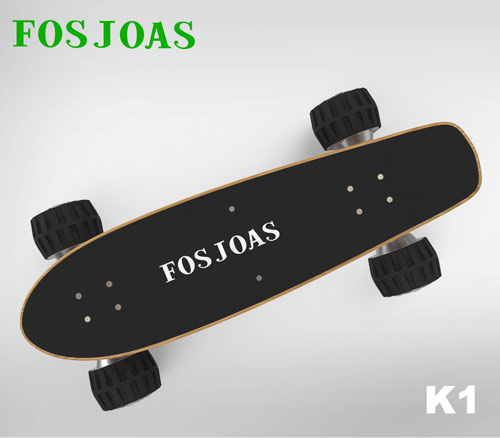 Different from traditional skateboards, Fosjoas K1 wireless electric skateboard can keep balanced by itself because of adopted aerospace attitude control theory, fuzzy software algorithm and gyroscope system. As long as girls stand on board and slightly incline forward, Fosjoas K1 motorized skateboard will move forward by itself. Meanwhile, further inclining forward will speed it up. If girls incline backward, it will slow down. In addition, Fosjoas K1 skateboard is also equipped with a 2.4G wireless remote control. Then, girls can realize all controls by such a remote control easily.

In spare time, Fosjoas K1 skateboard is perfect plaything and it kills boring time. Girls can ride it to anywhere. Don’t forget that Fosjoas K1 self-balancing scooters are powered by lithium-ion battery. Thus, it offers certain range. In other words, it is also a portable and convenient transport. Why not love Fosjoas K1 skateboard? It is so perfect.