Travel is one of the most difficult problems in busy and crowded downtown. Sometimes, if there is a traffic accident happens in downtown, the congested traffic will last for several hours. If people are driving car to handle something urgent at this moment, they can’t make it. As the contradiction between travel and traffic jam is poignant with each passing day, a brand-new thing comes into being, which is Fosjoas intelligent electric self-balancing scooter. There are many scooter types under Fosjoas, which make a great contribute to remit congested traffic in downtown.

Under Fosjoas, there are several series of electric scooters, including V-series, K-series and U-series. They share some same features, such as small figure, strong traffic ability, comfortable riding experience and wide consumer base. If people ask for a convenient travel, small-sized Fosjoas electric scooters, like V2 twin-wheeled electric scooter, V6 electric unicycle and K1 motorized skateboard, are quite suitable for them. They are based on aerospace attitude control theory, fuzzy software algorithm and gyroscope system to keep balance. Briefly speaking, people realize speeding up, slowing down and changing direction by leaning forward, leaning backward and turning left or right respectively. If people require long-distance travel, Fosjoas K2 and K5 standing up electric scooters are fitted for them. Their replaceable battery unit paves the way for unlimited range. 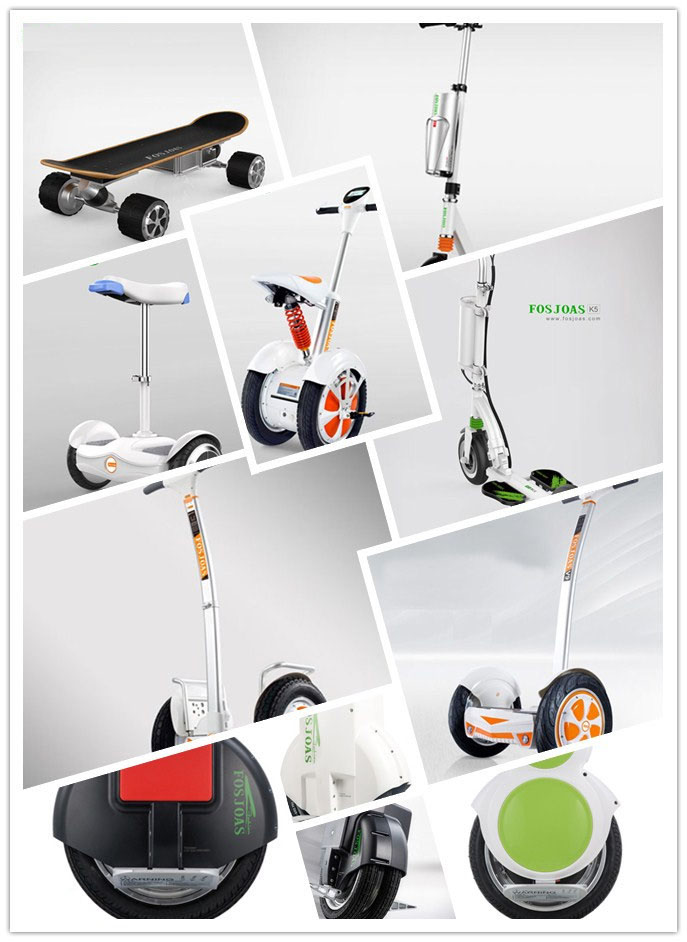 Fosjoas intelligent self-balancing scooters not only largely improve the travel efficiency of people in downtown, but also remit the congested traffic jam. In fact, what Fosjoas electric scooters really do is to return a smooth and harmonious life to people in downtown. In addition, the lithium-ion battery-powered Fosjoas electric scooters are also helpful to reduce the air pollution in downtown. After all, gasoline-powered automobiles discharge too many exhausts into the air, which directly harm the health of people. However, Fosjoas self balancing unicycle uk will change that to the ground.