The modification to the scooter implied the shift in function of scooter. These days, the two-wheeled scooter predominates in the market. This type of scooter has an excellent ability to keep balance. The two-wheeled structure further ensure a strong grip. Of those two-wheeled scooters, FOSJOAS V9 and U3 are the best ones. They become more functional than recreational. 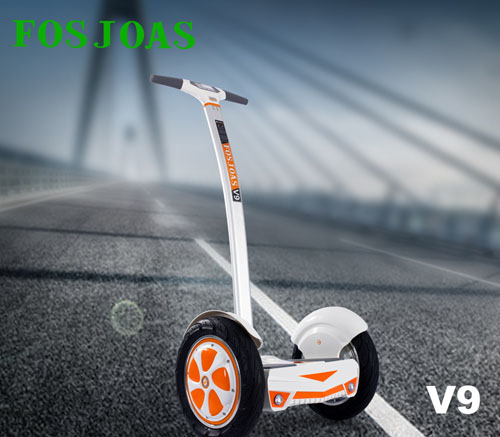 In some works, it is easy to seen FOSJOAS V9 or U3 applied. The workers in the plant usually ride FOSJOAS intelligent self-balancing scooter V9 or U3 to another workshop. It is clear that FOSJOAS V9 or U3 get treated as a transport in the plant. Unlike the previous models, FOSJOAS V9 or U3 is rather easy to steer. A beginner who even had never been exposed to electric scooter can steer FOSJOAS V9 at once. He just needs to stand on the standing board and leans forth or back to advance or fall back. The speed of FOSJOAS U3 or V9 attain 16 km/h, which is passable and safe in works.

FOSJOAS electric self-balancing scooter is also utilised in the promotion activities. When a firm was to release a new product to the public, the firm used to hire some part-time staff. Those staff held flags and walk around in the street. The publicity was limited to be sure. But now FOSJOAS V9 two wheel self balancing scooter will offer these firms a new way for publicity.