Sitting in front of the computer and surfing on the internet have been the common phenomenon of most people’s daily lives, the new words such as sub-health which caused by lack of excises come into people’s view recently, people realize that rather than going from a house to an office, interacting with nature during the day is much more important, so taking a walk after meals is not the activity only for the old, however, young people are not content with the form of going on foot, then, a new kind of "walking" – riding self-balancing two-wheel electric scooters jumps into the sight.

Fosjoas two-wheeled self-balancing scooter V9 is just like the concise version of traditional bicycle in terms of appearance, the biggest difference is that Fosjoas V9 has no cushion that leads to a new way of riding – standing-posture riding. In another words, although people are riding the scooter, the intensity of physical activity is not lower than that of walking. The scooter has a built-in intelligent system, the chip of this system is fine-tuned for instantaneous and intuitive control based on fuzzy algorithm, aviation altitude control technique, and gyroscope system, so the scooter can keep itself balanced automatically. When people want to accelerate or slow down or stop, people need to bend forward and backward to realize above operation, from another aspect, people can get best all-round exercises. 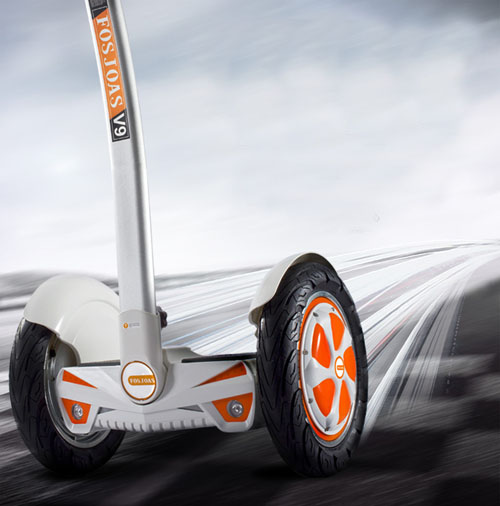 Riding Fosjoas self-balancing electric scooter V9 not only guide people walk out of the house but also is benefit to their health. Imaging that riding outside with best friends, breathing the fresh air, and experiencing green travel without pollution, no better cozy!

It is not lack of beauty in the world, just the eyes finding beauty. Although advanced science and technology make the old saying – A scholar does not step outside his gate, yet he knows the happenings under the sun true, people still need to go out to experience the real beauty. People should not wait for surprises, but yield.