Taking exercise regularly is an effective way to keep health and delay aging, especially when the environmental quality is declining with each passing day. Generally speaking, there are two modes of taking exercise. One is in enclosed gym and the other is in the open air. If it permits, people prefer to take exercise in the open air, like a park or seaside. Here comes another problem: what sports can be played outside?

Although jogging and bicycling are widely chosen as outdoor sports, people can't continuously do them for long time, one or two hours at most. Recently, the more and more popular Fosjoas V6 electric one-wheel scooter adds new blood to outdoor sports. More importantly, people can ride it for several hours and won't feel exhausted at all.

Compared with other Fosjoas electric scooters, the outline of V6 is the most concise: small figure, light weight and single wheel. When it comes to the single-wheeled design, it asks for better flexibility and balancing capability. During the riding course and when two feet are standing on the pedals on two flanks, two legs, two arms, the muscles of whole body, the backbone and the head get full exercise. 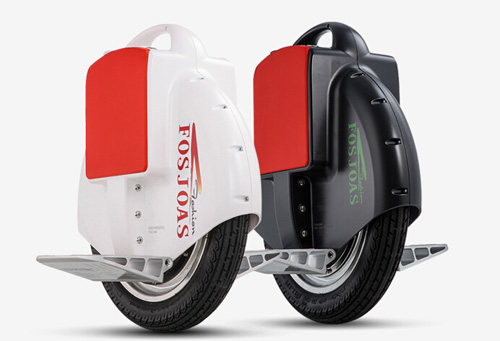 Riding Fosjoas V6 self-balancing one wheel electric scooter every day is helpful to alleviate backbone disease and mild humback. It is really a good way of exercising body, but its intensity is not high, which mainly benefits from adopted aerospace attitude control theory, fuzzy software algorithm and gyroscope system. Then, it can recognize rider's intension by his body gravity. Besides, it is powered by SONY lithium-ion battery. Thus, the riding only needs riders to keep balance instead of offering physical strength.

Now that Fosjoas V6 is equipped with SONY lithium-ion battery, it won't generate exhausts during the riding process. In other words, it is green and caters for the appeal of protecting environment.